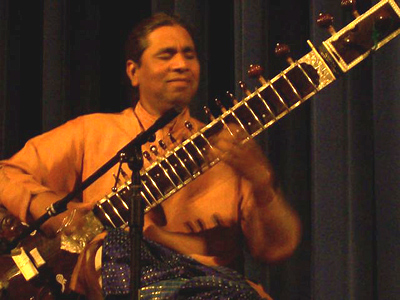 A 17th generation Sufi musician of Pakistan, Nizami offers exceptional programs of the ancient poetry and music of Rumi, Amir Khusro, Hafiz, and others. The poetry and arrangements were passed directly to him from his ancestors, and his enthralling performances are tremendously rich in form and spirit. Sufis are associated with the world-renowned whirling dervishes and represent the mystical dimension of Islam. They express union with the Divine through poetry, music, dance, and the arts. Nizami’s work promotes World Peace by connecting people with their Inner Bliss through the powerful medium of music.

Nizami has performed as a featured artist for Presidents George H.W. Bush and George W. Bush in Pakistan and at The Kennedy Center in 2006 with Masharif in attendance. He has given command performances for royalty, rulers and heads of state all over the world, including Saudi King Abdullah, the late King Hussein of Jordan, Yasser Arafat, Queen Elizabeth, Lady Diana, Prince Charles, the Prince of Japan, Tony Blair, the President and Prime Ministers of China, the Canadian Prime Minister, Kofi Annan the former Secretary General of the UN, Benazir Bhutto, Nelson Mandella, Prince Kareem Agha Khan, Kurt Waldheim when he was President of Austria, former President Jimmy Carter, and Ambassador Sada Cumber.

During the 30+ years Nizami taught Sitar, Tabla, Harmonium, and Voice in Pakistan, he saw many of his students grow into distinguished artists. He has the distinction of having trained the first professional female tabla player in Pakistan. In 2008 he came to the United States as a Fullbright Scholar and taught at The University of Texas in Austin from ’08- ’09.

A side note: Though a well-known cultural treasure in his country, Nizami is currently unable to return home because religious militants there consider music, as well as the teaching of women, a sin. His reputation as an international music diplomat, artist and teacher, and especially as a teacher of women, has caused this group to target him for death should he return.. Because of this fact, the United States government has granted him political asylum to stay safely in the United States.