An Evening With Chrysta Bell:
From Austin City Limits to Twin Peaks

“An Evening With Chrysta Bell: From Austin City Limits to Twin Peaks” is a multi-media performance.

Chrysta Bell will offer songs and share video clips and stories that chronicle her musical collaboration with David Lynch and other works covering the full spectrum of genres that have shaped her musical life.

Due to the size of the venue a limited number of tickets will be available.
Tickets available now! 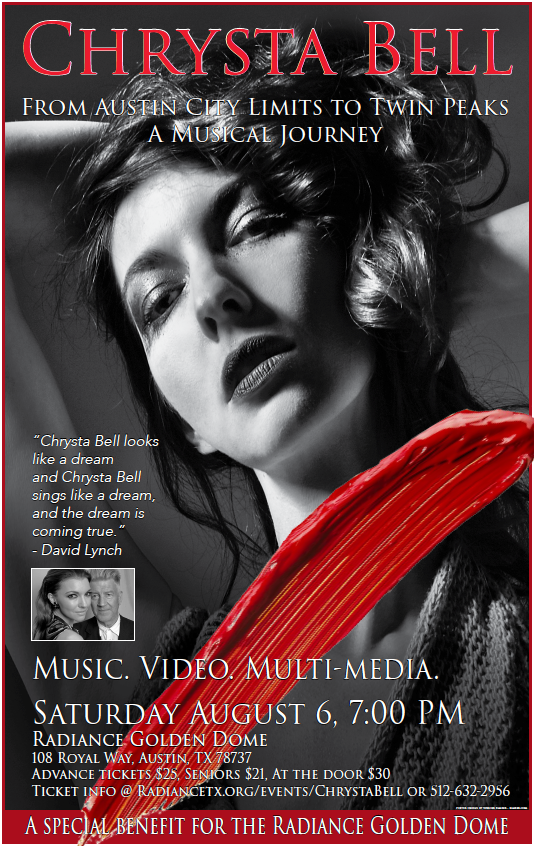 During her musical career, she has performed in over 30 countries and shared the stage with musical legends such as bass player Nathan East, guitarist Michael Thompson, guitarist and producer Adrian Utley (of Portishead), superstars Willie Nelson, Brian Setzer and Donovan, as well as members of King Crimson and Yes.

Chrysta Bell has had the great opportunity to write and record songs with iconic film director David Lynch, their collaboration yielding both the haunting “Polish Poem” from his INLAND EMPIRE soundtrack and the critically acclaimed album, “This Train” released in 2011. Lynch, Chrysta Bell and Dean Hurley have recently completed an EP of new material, set to be released in 2016.

In 2017 Chrysta Bell will appear in the highly anticipated new Twin Peaks series on Showtime.

Chrysta Bell began her professional musical career in Austin, Texas, as the lead vocalist for RCA Victor’s popular Euro Swing band, 8 1/2 Souvenirs. She continues to perform with her own band in clubs, theaters, private events and on festival stages around the world.

“… a muse of higher order, a cool siren with a stunning voice of rare dramatic power and range.” IRISH TIMES

“…rhythms are designed to ensnare, and Bell’s voice always sounds as if it’s emerging from smoke.” LA TIMES

– (London. Bush Hall) “…comparisons with Portishead and Massive Attack could certainly be drawn. The dark and fiery guise of Lana Del Rey also came to mind. However, it became evident last night that Bell’s on-stage persona propels her to another level entirely.” – The Upcoming

More about Chrysta Bell at:

The Golden Dome is quite a unique venue with limited seating. Get your tickets while they are still available.

$30 at the door (if seating available)

Help us spread the word – print this poster and hang it on your favorite public bulletin board!

Please add your email to our Radiance Dome Events List to hear about upcoming concerts and other events!